3D, if you shoot and make it well, it will look very good, the scene is very strong and the picture is very impactful. Some 3D movies are realized through post-production. If they are not made well, they are not as good as 2D movies. Because 2D is converted into 3D by software, if there is no guarantee quality when turning, the effect is not necessarily better than 2D from the viewing angle. . Therefore, it is necessary to ensure that the 3D stereoscopic content produced is in line with the sensory feeling through some technical means.

How does the human eye perceive 3D?

The important effect of 3D is the three-dimensional effect, because the parallax between the left and right eyes produces a so-called 3D effect, and the parallax has a certain range. If the parallax exceeds the range, it will produce a very bad visual experience, and even watch 3D movies for a long time. It will be dizzy or uncomfortable. When shooting and post-production 3D movie TV, if you don't grasp the parallax or depth of field, you will have a similar discomfort experience. Of course, there is no good evidence that there will be any harm in watching 3D, but there will be discomfort. 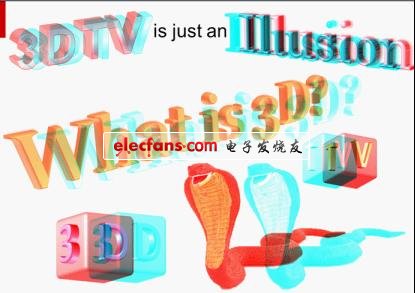 The left eye and the right eye see a certain gap between the two pictures. The eyes of the person analyze the picture. Through the judgment of the human retina, the signals obtained by the left and right eyes form a three-dimensional feeling through the analysis of the brain, and the relationship between them is resolved. The relationship with the three-dimensional, the last is the 3D effect, which is the process by which the human eye perceives 3D through the sense. Someone raised a question. Can you feel the effect of 3D if you close one eye? In fact, the depth of the image needs to be perceived by both eyes. Sometimes, the stereoscopic information can be perceived by one eye. The distance will be revealed by 2D, it will provide us with some information, the part of the image revealed and covered, through which to judge who is in front and who is behind. When watching 3D movies, there are often images that run to the back of the screen. There are several scenes in "Rio Adventure". When the parrot learns to fly, it will rush to you. The effect is not always there, it is through the later stage. The production is made specifically. Beijing Tai did some 3D experiments and got some experience. It is easier to go to the screen and accept it. If the effect of going out is not very acceptable, everyone should consider the impact of the external impact when doing 3D effects. The ratio, that is, can't be done too much.

Some information sheets can only perceive its stereo depth, and we can see the effects of 3D, including texture changes, through light and dark changes. For example, if the flower is far away, it will be more visible. If you look at the close-up, you will be able to distinguish it. The farther away you are, the smaller the picture will be. You can perceive the depth of 2D through this information. We can also perceive the depth of 2D by the size of the object or the change in size. Motion parallax, when sitting in the car, the near object is in the opposite direction to us, and the depth can be perceived by one eye. The position of this object is different through two eyes. This must be felt by two eyes. Through these, the stereoscopic distance and depth can be well perceived.

We focus on independent research and innovation, providing more durable , cheap , high quality , cool lightning cable to our customers . it hits all the right notes in terms of design, functionality, and price. It`s impossible for us to test every Lightning cable, but having tested hundreds of them since Apple replaced the 30-pin connector in 2012, and after comparing the PowerLine cable against our previous top picks, we can say that MaiMi cable stands out from the crowd.