Silicon and MEMS oscillators are joining the ranks of quartz crystals and ceramic resonators in the highly differentiated oscillator market. Crystal balls are not required to select the right application, but some relevant facts can help.

Compared to ceramic devices, silicon and MEMS (Micro Electro Mechanical Systems) oscillators are more resistant to shock and can be packaged in smaller packages.

â€¢ The power consumption of any oscillator depends on the output load.

Oscillators are as ubiquitous as power supplies in electronic systems. Some people think that they are as important as power supplies, and they can be found in anything that requires timing signals, from digital watches to televisions and PCs. Because they play an important role in the timing of electronic devices, their failure can cause downtime for the entire system. For example, investigators analyzed the 1972 Fremont train crash in California and found that the cause was a crystal failure on a control panel. The crystal storage capacitor is improperly valued, causing the crystal to overdrive and the device to jump into an overtone oscillation frequency. As a result, the train did not decelerate but accelerated when it entered the station, causing a crash in which many people were injured. In view of this problem, many engineers no longer use pure crystals as their own oscillators. Instead, they chose a commercially available product that contained amplifiers, storage capacitors and other components.

All digital devices require a clock source such as a silicon and MEMS (Micro Electro Mechanical Systems) oscillator, a quartz crystal or a ceramic resonator. For example, a dozen clocks on a PCB (printed circuit board) for telecommunications and servers may be required. Designers implement quartz clock oscillators when implementing traditional clock sources, but MEMS and pure silicon oscillators are gaining a foothold in this highly differentiated market. In addition, low-precision oscillators are also made of ceramic materials such as lead zirconate titanate. Applications drive the applicability of a technology. For example, if you need a clock source with an accuracy better than 1 ppb (parts per billion), you must abandon the MEMS and use an atomic oscillator such as a chirped clock or a chirped clock source. These devices have an accuracy of 1 ppt (one part per trillion). For example, GPS (Global Positioning System) satellites require this precision to maintain synchronization with the rest of the system (Figure 1). 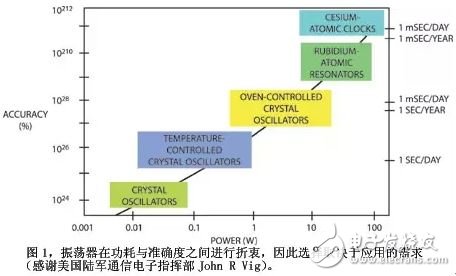 At the other end of the accuracy spectrum is a simple ceramic resonator. The accuracy of these devices is measured in percentage, because the value obtained in units of parts per billion is too large to be used. The typical initial accuracy of a ceramic resonator is in the range of 0.5% to 0.1%, and drift due to aging or temperature changes may change this interval. Therefore, the tolerance of inexpensive ceramic resonators is only Â±1.1%, and the accuracy of higher-end automotive and commercial products is Â±0.25% and Â±0.3%, respectively. The targets of these tighter ceramic resonators are commercial USB (Universal Serial Bus) 2.0 circuits and automotive CAN (Controller Area Network) bus applications. What is the operating temperature? 40 Â° C to +125 Â° C. Low cost ceramic resonators with frequencies from 200 kHz to about 1 GHz are suitable for embedded systems where timing requirements are not critical. Ceramic devices start faster and generally have a smaller volume than quartz devices. They are also more resistant to shock and vibration. Manufacturers of ceramic resonators include Murata, Oscilent, AVX, TDK, and Panasonic.

For digital systems using UART (Universal Synchronous/Asynchronous Transceiver), an error-budget analysis should be performed to ensure that the baud rate obtained from the resonator frequency meets the specifications. If you only use the UART during code development, you can switch to ceramic resonators during manufacturing to save costs.

Note that some silicon oscillators use RC (resistor/capacitor) or LC (inductor/capacitor) energy storage devices instead of ceramic or quartz crystals. These oscillators have a wide range of accuracy at different prices. Such oscillators manufactured by companies such as STMicroelectronics have all the advantages of ceramic resonators, but are smaller and cheaper. Louis Grantham, product marketing engineer at the company, said: "The focus of the silicon oscillator is that it is more robust than fragile crystals. In addition, crystal manufacturability is more difficult than IC."