Robots that can write are no stranger. Now, smarter robots will pull erhu; deaf-mute people used to rely on sign language to communicate with people. Now, the sign language translator can directly translate words into language. On the afternoon of December 28th, in the 11th Southeast University Student Innovation and Entrepreneurship Exhibition in 2016, Southeast University's academics showed the latest development of black technology, cool and avant-garde. 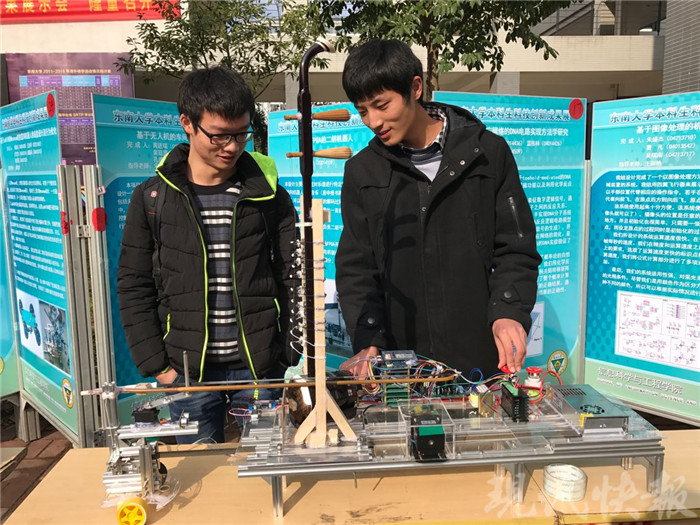 Erhu robot can pull "Childhood", "City of the Sky"

A black erhu, surrounded by a pile of buttons and chips, sounded "a flash of sparkling crystals, all the stars are small stars". On the afternoon of December 28th, at the 11th Southeast University Student Innovation and Entrepreneurship Exhibition in 2016, when a robotic arm waved the erhu rod and pulled it back and played the "Little Star", the crowd gathered in the crowd. A burst of exclamation, "Can the robot pull the erhu?"

Xu Xiqing, a junior in the School of Information Science and Engineering at Dongda University, is one of the designers of the Erhu robot. He said that this erhu can imitate the complete movement of the person pulling the erhu, the left hand pulls the bow, the right hand presses the string. The current robot is to control the cooperation of the bow and the string by driving the mechanical arm and the switch control button.

"We will encode the score from the notes of dao ruai mi fa sao la xi dao, and then play music to the robot through the headphone cable. There is an audio decoder in the robot. The sound waves of each note are different. When you press dao, on the oscilloscope. The vibration frequency will be displayed. We will record it and encode it. When programming, we can edit the transition between the two notes by measuring the peak value of the note vibration.â€ Xu Xiqing said that after the code is completed, it is connected to the robot arm and driven. With the robot arm, you can play a song. This robot, from design to production, took 1.5 months.

Today, this robot has been able to pull out four songs such as "Childhood", "City of the Sky", "Most Jiangnan" and "Little Star".