The use of LEDs for high-brightness illumination requires the use of the maximum current drive allowed by the manufacturer, but the average life of the LED is highly dependent on the operating temperature. A 10Â°C increase in operating temperature can reduce its life by half. This situation forces the designer to reduce the regulation current and sacrifice brightness to extend the life. If the LED is required to operate at a higher ambient temperature, the current must be further reduced to minimize the ambient to chip temperature rise to ensure a long life. However, due to the upper temperature limit, this will reduce the illumination brightness in the low to medium ambient temperature range. Essentially, we work in high temperature environments by reducing the brightness. Figure 1 shows an LED driver circuit that uses a thermistor to control an operational amplifier (op amp) that reduces the drive current as the LED board temperature rises. 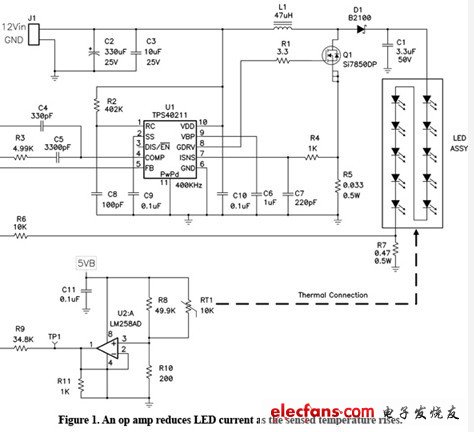 Figure 1 The op amp reduces the LED current when the temperature rise is detected.

The LED array current is adjusted by detecting the voltage of the current detecting resistor R7 and used as a feedback control of the controller, for example, TPS40211. The op amp circuit (including R9) injects a current into the feedback node (FB) to reduce the regulation current or sink its current to increase the regulation current. The FB node voltage is kept constant at 0.26V. Increasing the voltage at the op amp output (TP1) must be compensated by lowering the R7 voltage to reduce the LED current. When the op amp output is just 0.26V, the injection current is zero and the LED regulation is unaffected.

The thermistor RT1 is a negative temperature coefficient (NTC) device. Its nominal resistance is 10K ohms at 25Â°C, but increases above 300K ohms at â€“40Â°C and below 1K ohms at 100Â°C, and is in a non-linear manner. Resistors R8 and R10 turn the 5V bias voltage down to the FB voltage, while the value of R9 controls how quickly the current decreases with high temperature. It is important to use a well-adjusted bias voltage because the accuracy of the circuit is affected by the bias tolerance. Resistor R9 must be placed as close as possible to the current mode boost controller in order to minimize noise sensitivity. Using a thermal epoxy, connect the thermistor RT1 as close as possible to the central LED on the PWB. 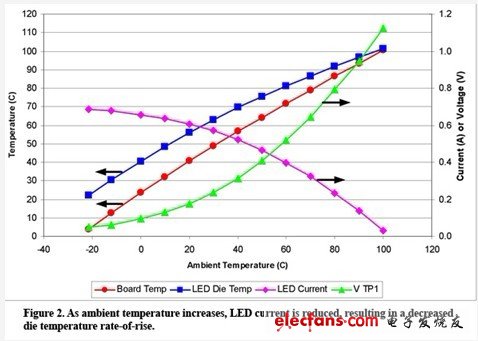 Base site lead-acid battery protector system is the smart resonance pulse technique for 6V/36V cell battery or 6V/36V battery pack in series with 3PCS 2V/12V cells. It is working as a new generation of high-tech products for daily battery maintenance in telecom base site or electrical power system.
It utilizes the energy from battery self-power or floating power supply, to produce a unique smart electronic pulse, then feed back to the battery through the output line, Resonance with coarse and hard lead sulfated crystals in negative plates of batteries and converted to active substance under the reaction of pulse charging current which dissolve lead sulfated crystals, Keeping the battery working at a high efficiency. Under the disturbance by the smart resonance pulse, the new lead sulfate crystal is prevented from being formed, and the service lifespan of the lead-acid battery is prolonged 1~2 times than before.
There will be individual differences in State-Of-Capacity (SOC) and internal resistance (IR Value) of batteries after used for a certain number of years. It is called the battery unbalancing. Due to the total floating charge voltage of the rectifier remains unchanged and keeps constant, when the battery pack is in floating charging status, the floating voltage of the cells with larger internal resistance will be higher than that of the normal battery, resulting in the normal battery's floating voltage is lower. Batteries floating charged in this unbalancing way for a long time will cause the higher voltage cells seriously water dehydrated, and the lower voltage cell is in a state of under charged. This way of vicious spiral formed will accelerate the base site batteries premature failure.
Our protector system set a equalized charging function. If the terminal floating voltage of the battery system is higher than the standard value of protector system designed, the system automatically and smartly switches to the over-voltage balanced working state. When the voltage drops lower than standard value, it automatically changes to smart pulse maintaining state. The decrease of battery internal resistance and the improvement of the battery equalization lead to the battery lifespan prolonged.